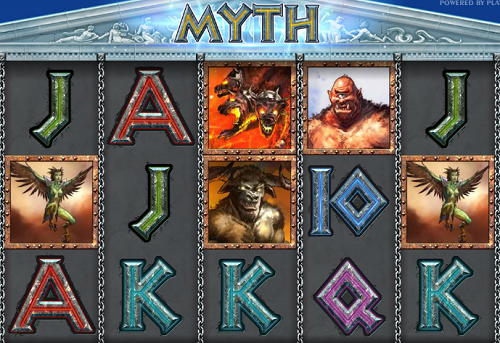 Myth is a high quality online video slot game produced by Play n Go. The game itself has a Greek Mythology theme and includes various images of Mythological monsters such as the Cyclops and Medusa. The slots background is a view of Mount Olympus where the reels are hung by chains from the top of the grand structure. The background music features and arrangement stringed instruments put together to produce a mood of excitement. The graphics are sharp with vibrant animation and a burst of sound effects when a winning combination is produced on the reels.

The machine setup in Myth is based around the classic Play n Go arrangement of 5 spinning reels with a total of 20 paylines. Before each spin, players can select the number of paylines from 1 up to 20. Players can also set the number of coins they bet per payline from 1, up to 5 coins per line. The more coins that are bet per payline, the higher the payout for each win. When it comes to the reel symbols, the 5 main reel symbols feature types of Greek Mythological monsters. The two highest paying non-bonus symbols include both the Minotaur and Medusa paying 750 coins each for all five across the reels.

Wilds That Double Your Winnings

After Medusa, the next highest paying symbol is Cyclops followed by the Hydra and finally the Harpy. For the lower paying symbols, the game uses the classic high card symbols from 10 to Ace. In addition to the standard setup, Myth slot also offers up a range of bonus features in the form of a Wild symbol, Scatter symbol and free spins bonus round. The Wild symbol in this game is the image of a Greek soldier. The Wild symbol is unique in that it can substitute for all other symbols with the exception of the Scatter symbol. When the Wild symbol completes a winning combination, the resultant win will automatically be doubled.

The Wild symbol in Myth is also the highest paying symbol of the game. Finding all five Wilds across the reels will trigger the slot jackpot payout of 5000 coins on a standard bet. The game also includes the popular Play n Go gamble feature. After any standard line win, a gamble button will pop up. In the gamble feature, players can double or quadruple their winnings by correctly guessing the colour or suit of a playing card.