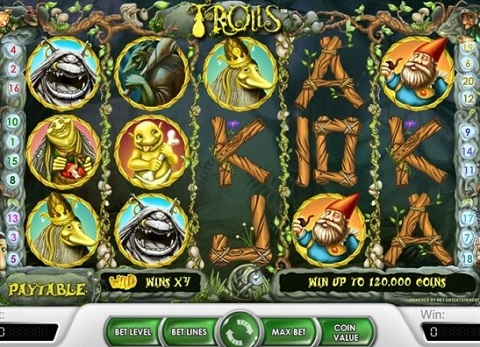 Released by leading software developers, NetEnt Games, Trolls is a whimsical online video slot that is something straight out of a fantasy or fairy tale.

The trolls in this slot game are from what they have usually been perceived as – ugly and annoying – with great renditions of cutesy troll characters and a playful theme following the mystical creatures the were said to have lived under bridges.

This 5-reel, 20-payline video slot offers players additional winning chances through wilds, golden wilds, scatters and free spins and can be accessed from countless online and mobile casinos around the world. Practice play in free and demo modes are also widely available.

The symbols in the Trolls slot game truly accentuate the game’s theme, while also providing some classic slot imagery, such as the high value playing card icons.

Ace, King, Queen, Jack and 10 actually make up the lower value symbols in this game, while the higher value symbols are comprised of 6 trolls and include one wearing a gold crown, another holding a basket of apples, one wielding a club, one made out of stone, a baby holding a bone and a gnome-like character with a red hat and pipe.

The Trolls online slot is another game to come from NetEnt Games with exceptional standards in terms of graphics and design. The slot has been beautifully made with crisp 3D renditions on and around the reels.

Looking at the Trolls slot almost immediately displays the effort and time that has been taken into developing this game, with intricate detail in the vines that surround the reels as well as well-rendered characters that hold tonnes of personality.

In addition, the game’s interface, on the whole, has been designed with player preference in mind, with an action button bar below the reels allow players to control just about every aspect of the game.

A feature synonymous with releases from NetEnt Games, as well as most other developers, the Trolls online slot game comes with wilds, which essentially substitute for all other symbols except for the scatter.

The wild also brings in some decent rewards when 5 appear on an active payline, offering as much as 10 000 coins as a prize.

In addition, this game also comes with golden wilds. The golden wild will only appear on the 3rd reel, however, when it is used to complete a winning combination it will pay out 4 times a player’s winnings.

The free spins bonus feature in the Trolls online slot can be activated when a player manages to land 3 or more of the full moon scatter symbols anywhere on the reels.

Players that receive 3, 4 or 5 of the scatters in a single spin will be rewarded with 10, 20 or 30 free spins respectively. Any winnings made during this round will also be subject to a 3x multiplier and the feature can also be retriggered by landing another 3 full moon scatter symbols.