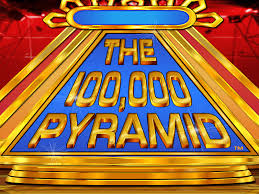 The 100,000 Pyramid is an online slot game created by Las Vegas based slots developer International Game Technology. IGT was founded in 1975, where the company quickly became a large-scale producer of land-based slot machines. IGT was also one of the first developers to create slots for the online gaming market, and the developer has continued to do so despite their recent merger with GTech in 2015.

The 100,000 Pyramid is a sequel to the original 50,000 Pyramid slot, and plays out over 5 reels and 15 adjustable paylines. The game offers a themed Pyramid bonus game containing free spins, multipliers and more.

The 100,000 Pyramid is based on a television quiz show, and the backdrop of the game is the TV set for this game show complete with studio booths and spotlights. The design of this IGT slot is larger than life to reflect its game show theme, and the reels are encased in a large gold reel frame that also bears the game’s logo.

The reels of The 100,000 Pyramid contain a selection of colourful symbols that depict the prizes players may win when participating in the game show. These prizes range from cars and cameras to island holidays, and each symbol offers its own matching sound effects in winning combinations.

The symbols on the reels of The 100,000 Pyramid all relate in some way to the game’s theme. These symbols include the Mystery 7 icon, piles of gold bars, the Celeb Star symbol, a pair of game show contestants, a red sports car, an island holiday, a television, and a new camera.

The Mystery 7 symbol is the most valuable here, awarding 1,000 coins for 5 on a winning payline. The gold bars, Celeb Star and contestants are the second most valuable icons, valued at 500 coins each for 5 of a kind.

The 100,000 Pyramid logo symbol acts as a wild in this IGT online slot game. In traditional style, the wild can substitute for any other symbol on the reels, all except for the scatter symbol. The wild symbol will also trigger the game’s fixed jackpot of 100,000x when 5 appear on a winning line.

The scatter symbol here is a Winner’s Circle scatter logo, and landing 3 or more of these symbols on the reels will activate the Pyramid bonus feature.

The Pyramid bonus feature is a themed bonus feature that plays out much like a game show. When players trigger this feature in The 100,000 Pyramid bonus online slots, they will be redirected to a pyramid game show prop. Here, they can advance each portion of the pyramid by choosing randomly from a selection of hidden symbols. Each symbol will reveal free spins, bonus features, multipliers and more when chosen.

When all portions of the pyramid have been completed, these free spins and online casino NZD bonus features will then play out during a free spins feature. The free spins cannot be retriggered from within the feature.